The Krewe’s scholarship committee finalized their selections in May and are pleased to announce there are 6 recipients of a $1500 scholarship to assist the students in continuing their education for the 2016-17 school year. The committee had 1 returning recipient and added 5 new students from all other the country with varying academic pursuits.

Abigail is a returning scholarship recipient. She is attending her 3rd year of college at Fresno State majoring in agriculture communications. Once she completes her bachelor’s degree she plans on attending law school. She is a member of Fresno State’s Field Day committee, Redwave class and the Agriculture Ambassador’s. She also participates in the Advocates for Students with Disabilities and the Services with Disabilities Students Advisory Committee to help raise disability awareness. Abigail continues to volunteer at Shriners Hospital as well working with A Touch of Understanding, an organization that provides disability awareness education.

Adam has recently been accepted to Avert University. Adam’s dream job is to become a commercial airline pilot. His current plans including following a field of study that will allow him to become a Prosthetist, a job that he feels would suit him well as he would enjoy helping children and feels he could empathize with what they are experiencing. Throughout High School, Adam has participated in numerous volunteer activities including work with his local church, Habitat for Humanity, community cleanup, the American Lung Association, and the Central Florida 5K.

Caroline is starting her sophomore year at High Point University. She is interested in pursuing a career in the media industry where she can help bring awareness to persons with disabilities. Caroline is currently on the Dean’s List at High Point University and has received academic excellence awards in AP Statistics, Computer Applications and French III. She is a member of the International Child Amputee Network, recognized as a Distinguished Young Woman of Frankfort Little Sister, and active in both cheerleading and dance.

Chelsea has recently been accepted to The Warren Alpert Medical School at Brown University. Her goal is to become a doctor specializing in the field of pediatric oncology. Growing up and spending a lot of time in a hospital setting, has given her an appreciation of the dedication of health care providers and would like to facilitate similar connections with her patents in the future. Chelsea had graduated with honors from Brown University, was inducted into the Sigma XI Science and Research Honor Society and was recognized as the Medical Scribe of the month from the University Emergency Medicine Foundation. She has also participated in the distribution of heath information materials for homeless and underserved families, backpacks and school supplies for needy children as well as the Brown University Relay for Life.

Liam has been accepted for enrollment at Marist College. He plans on majoring in public relations with a goal of becoming a writer. Liam has been an active volunteer and participant in the American Cancer Society’s Relay for Life since early childhood and a team caption for 9 years raising thousands of dollars for cancer research. He participated in his High School Band, Golf and Wrestling teams, was the winner of a Martin Luther King Jr. essay contest and is a member of the National Honor Society.

Thomas has been accepted for enrollment at Babson College where he plans to major in Entrepreneurial Studies to help grow his current business that builds and sells custom longboards and skateboards. Thomas stays active by snowboarding, longboarding and playing football. He is an active member of his local Recycling and Food Pantry clubs, volunteers in community assistance projects, and is a member of the National Honor Society.

The Krewe wishes all of our 2016-17 scholarship winners continued success in the upcoming academic year. 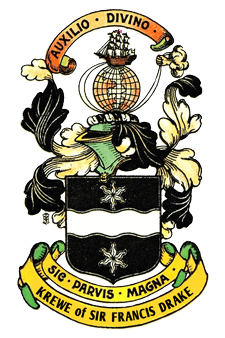